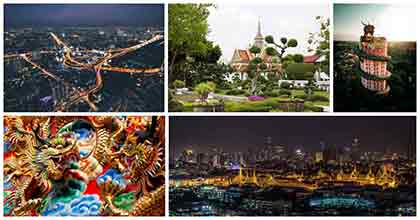 Discover more about Bangkok, Thailand and enjoy its grandeur.

Bangkok, Thailand ---- one of the most famous and most visited cities in the Southeast Asian region. Millions of tourists from all over the world flock to this city each year to experience its vibrant culture, marvel at its dazzling golden temples and get a taste of the incomparable flavors of Thai cuisine.

With an endless list of beautiful destinations and exciting attractions to offer, the Land of Smiles will certainly not disappoint even the most seasoned and well-traveled holidaymakers. But despite it being so heavily advertised, there are still certain facets of the tourism of Thailand that you might not know about. These are some interesting and equally fascinating facts about Thailand’s capital that will definitely stir up your curiosity and trigger your interest to make your way to Thailand:

The name Bangkok consists of only seven letters with two syllables. You may be thinking that this city’s name is short but you may want to think again. Truth is, Bangkok is just the international name of the city but its traditional name is considered to be the longest name for a city in the world that you’d be lazy to read it --- Krung Thep Mahanakhon Amon Rattanakosin Mahinthara Yuthaya Mahadilok Phop Noppharat Ratchathani Burirom Udomratchaniwet Mahasathan Amon Piman Awatan Sathit Sakkathattiya Witsanukam Prasit.” If you were able to read all that properly in one go, then we tip our hats off to you!

The golden temples in Bangkok have always been a major part of Thailand culture. However, these golden temples are not the reason why it earned its moniker city of blings. Believe it or not, Bangkok is home to a handful of Thailand’s ultra-rich. In fact, with over 200, 000 millionaires in Thailand, 95% of them live in Bangkok. Cha-ching, right?

Want to go to Venice, Italy but don’t want to bleed yourself dry? Well, Bangkok is the place for you. This city is also famous to tourists as the Venice of the East. It sits atop dozens of canals, and the buildings stand on stilts just like those in Venice. Ciao, Bangkok!

If the canals don’t make it like Venice, then check this out: just like Venice (the sinking city of Italy), Bangkok is also sinking at a rate of 2 - 2.5 cm per year brought by the heavy development and the rising sea level. It is believed that some parts of the city will be underwater in the next 15 years. So you might want to book that flight to Bangkok sooner.

Looking for a market that has a wide array of options at cheap prices? Bangkok has it all for you. It has the world’s biggest market called Chatuchak Weekend Market spread over 27 acres of land divided into 27 sections so you eat and shop till you drop.

A countdown and fireworks --- that is how we usually celebrate our new year, but Thai people have a different way of celebrating which involves a lot of “Sanuk” in it and tons of water. The place to celebrate “Songkran” or the Thai new year is no other than its capital city, Bangkok.

Bangkok’s local Chinatown, Yaowarat is the largest in the world. It is home to a million Chinese people and is one of the most vibrant places in Bangkok to eat and shop.

It’s almost impossible for any tourist to leave Bangkok without getting his fill of Thailand’s colorful culture, stunning attractions and, of course, its mouth-watering cuisine. But that is not all that you can get in Bangkok. Aside from being home to some of Thailand’s best attractions, it is also where the country’s most stunning single Thai women reside.

Imagine not only falling in love with the city but also falling in love IN the city? A trip to Bangkok will not only give you experiences and memories you’ll cherish forever, but you could also be going home with a potential lifelong partner.